My elder brother put it best when I tried to describe returning to ordered Australia after a month immersed in the colour and chaos of India. Sensory deprivation! Having lived there for over a year as a PhD student in the 1970s he returned to cautious Canberra – a bit like landing on the dark side of the moon after being on the set of a Bollywood movie. Now I understand!

A rowdy wedding party takes over the street in Ahmedabad. 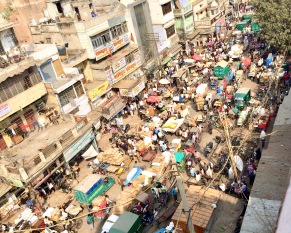 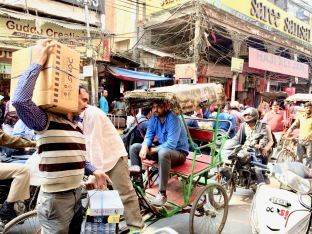 The colour and chaos of Delhi streets.

India is indeed a celebration of the senses with its noise, colours, smells and tastes and I wonder now why it took me so long to visit. Having missed the boat (excuse the pun) in the days way back when all the cool kids followed enlightenment-seeking hippies and pop singers to the destination du jour, I knew my window of opportunity was progressively narrowing.  Luckily, my sharp-eyed travel buddy spotted a perfect opportunity in a small-group tour specialising in tribal textiles – right up the alley of two ethnic craft lovers.

We visited the ateliers of dyers, weavers, spinners, knitters and stitchers of numerous fabrics and styles; spoke with scholars documenting and saving precious samples; met accomplished artisans in villages, cities, tiny family compounds, and nomadic tribal people out in the desert.  Its heartening to see cooperatives and organisations working to safeguard these precious crafts and skills and we eagerly visited the outlets where the products of painstaking labours are sold at fair trade prices. Female tourists also make a bee-line to more commercial retailers such as the acclaimed Anokhi and Fabindia, both started decades ago by foreigners wanting to share and preserve the textile skills more widely.  Their wares include the output of villages that specialise in industries such as beautiful quality block printing.

While India’s renowned textiles were the initial lure, having endlessly drooled over the spoils of returning friends, India’s layering of religions and cultures has fed the richness of art, architecture and cuisine that makes it such a fascinating destination. From the early Indus civilisation of the Harappas, which dated back beyond 3000 BC, were added the traditions of Jainism, Hinduism, Sikhism and Buddhism. The Moghul invasion from around 1500 AD introduced Islam and its religious and cultural heritage. I’ve long remembered the awe in which my late architect father-in-law spoke of places such as Fatepur Sikri, the red sandstone city founded in the mid-1500 by the Moghul Emperor Akbar as his capital and regarded as one of the best-preserved examples of Moghul city architecture.  It is listed under UNESCO World Heritage protection, along with that other incomparable Moghul-era monument, the Taj Mahal. After witnessing the feisty Miriam Margolyes moved to tears by its beauty in the BBC TV series The Real Marigold Hotel, and with THAT photograph of Princess Diana etched in my brain, I knew I couldn’t retire my backpack before seeing the Taj. 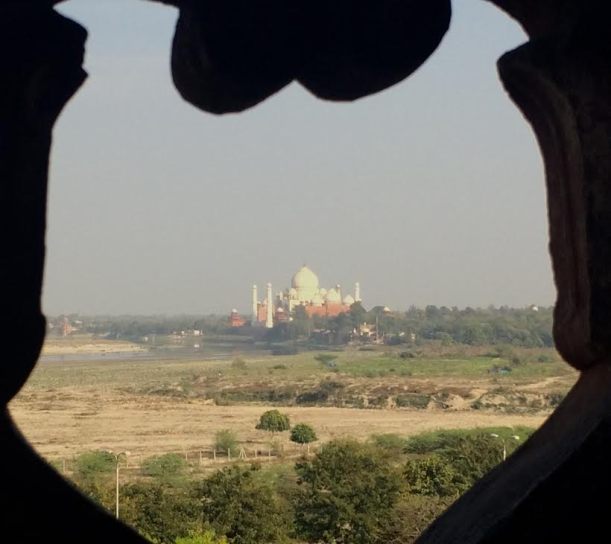 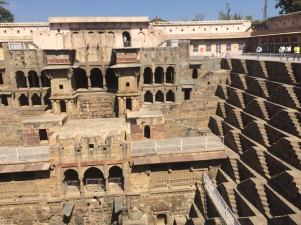 Taj Mahal from the Fort, Agra; porticos in the Fort; Chand Baori stepwell, near Jaipur.

These architectural gems just scratch the surface. American historian Will Durant made the point that in spite of the barrier presented by the Himalayas India had bequeathed to the West ..”such gifts as grammar and logic, philosophy and fables, hypnotism and chess, and above all numerals and the decimal system.” In Jaipur we visited the early 18th century Jantar Mantar Observatory built by the founder of Jaipur, Maharaja Sawai Jai Singh II, a brilliant scholar of astronomy.  It comprises 19 architectural astronomical instruments including the world’s biggest stone sundial.  The impressive structures also are under UNESCO World Heritage protection. And that’s not to mention India’s many other contributions including the Auveydic medicine system and Yoga. Then there’s the brilliant cuisine – delicious AND nutritious and ticking all the boxes before “gut health” became the new big thing in dietetics. 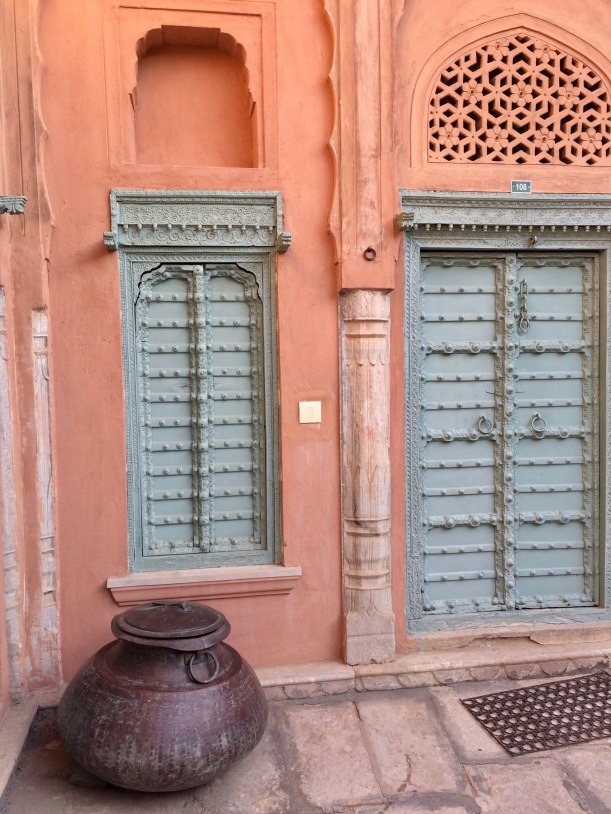 Demoiselle cranes in the Little Rann of Kuutch wetlands.

India is full of surprises and paradoxes. In a country of around 1.35 billion people, the second-most populous, it’s possible to find open spaces with expansive wetlands attracting numerous migrating birds and the international twitchers who follow them. Wildlife sanctuaries offer opportunities to spot rare wild animals. Gaudy weddings and rowdy celebrations endlessly manifest, stopping traffic and keeping us bemused tourists awake. The roads are hair-raising but instances of road rage are rare. The Aussie suburbs seem so boring by comparison. I can understand the sentiment of the world’s most famous Indiaphile, Scottish historian and writer William Dalrymple,  who declared if he had five more lives he’d live them all in India.

Livin’ the life…it pays to be a protected species in India.