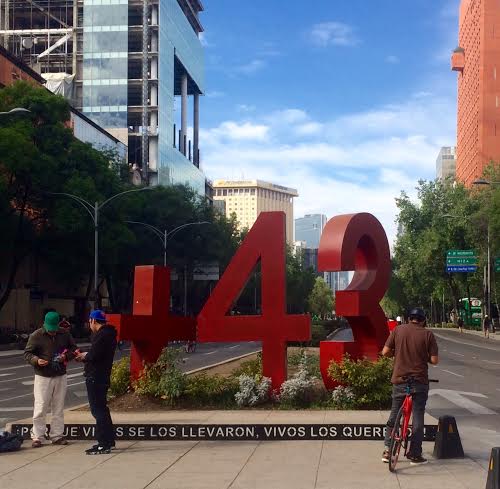 A permanent reminder of the “disappeared” 43 in Reforma Avenue.

For all Mexico’s wonderful attributes the power of the drug cartels and the way their tentacles have infiltrated the political process are a frightening reality. Sadly, apart from the misery that the drugs inflict worldwide, it’s the Mexican people themselves who are the biggest losers as collateral damage in this deadly war. Nowhere is this more obvious than in the distressing disappearance in 2014 of 43 student teachers in Guerreros State, just south of Mexico City, ironically the home of the famous international beachside holiday destination of Acapulco.

The students were said to be on their way to a protest rally when their bus was stopped by allegedly corrupt local police. An early official story had suggested that the police abducted the students and handed them over to a drug gang who then killed and burned them at a nearby dump. However, no real evidence of what happened has surfaced while rumours circulate of the involvement of Federal Police and collusion between local officials and the cartels. International calls for a more thorough investigation have not yet reaped results. 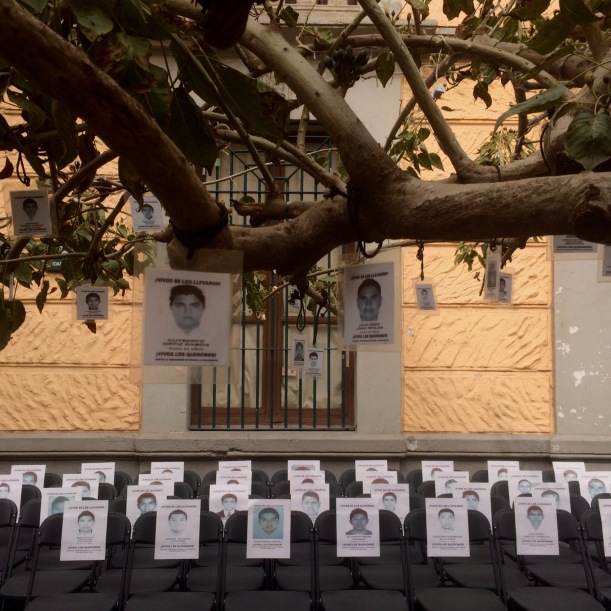 In the meantime the families and friends of the students are maintaining constant pressure to unearth the truth. In the historic old quarter of Mexico City we came across a moving tribute to the disappeared of 43 empty seats, each bearing a photograph to commemorate a student, under a tree festooned with hanging name cards, like a sad Christmas tree.  In the centre dividing strip of the city’s main avenue, Reforma, large red figures 4 and 3 provide a permanent and prominent reminder of the mysterious disappearance. And just weeks ago a large demonstration of torch-bearing protesters marched down Reforma demanding answers from the Government. Australians were given a small taste of the lawless nature of parts of Mexico late last year when the bodies of two holidaying surfers were found in their burned-out van in the northern state of Sinaloa, infamous as the home of the drug cartel which bears its name, although the deaths were attributed to a robbery and not to the ruthless gang. 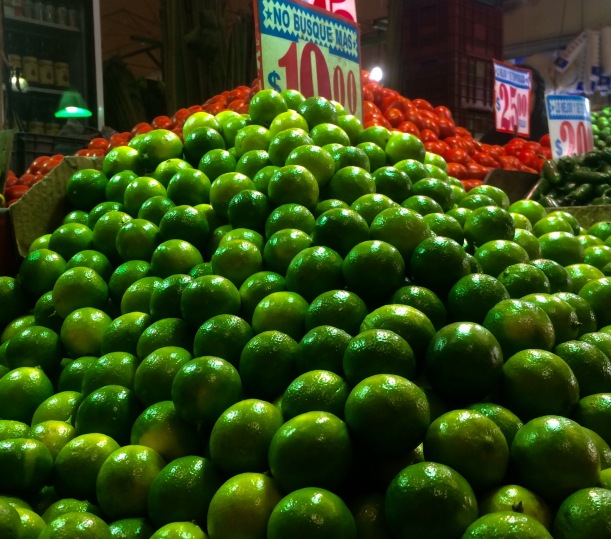 My first taste of guacamole – that creamy, tangy, spicy, addictive avocado dip – was one of those culinary lightbulb moments to an Aussie-trained tongue. A bit like my first sensational introduction to hummus decades ago in the Middle East.  Once tasted never forgotten. Of course guacamole is just one of the many unusual taste treasures that has made Mexican cuisine so revered.  Pre-visit, apart from guacamole, my only experience of Mexican food was from supermarket kits of tacos and burritos, and visits to Taco Bell-type franchises in the United States. All very processed and laden with additives. 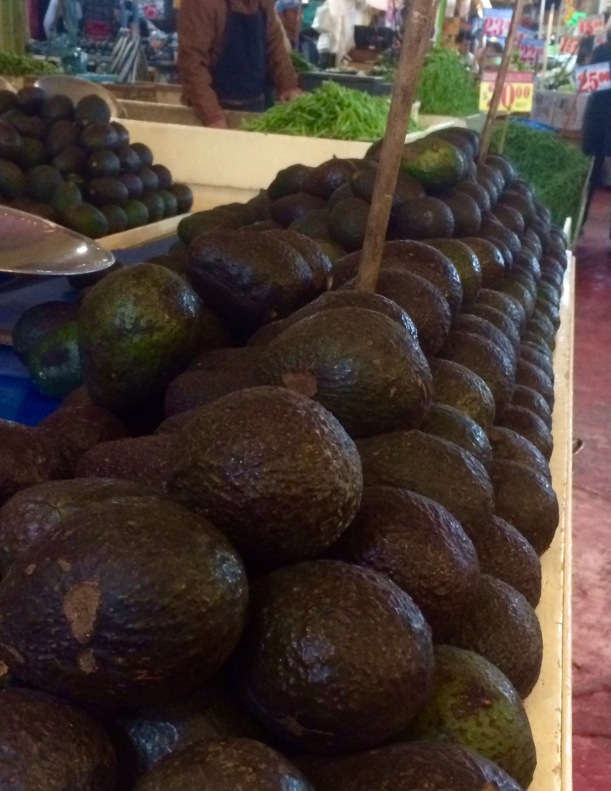 So the revelation of the real deal, like real guacamole, was that what I thought was Mexican was really the Tex-Mex version. This is the cuisine developed by Texans of Spanish or Mexican heritage, or immigrants mostly hailing from northern Mexico, living in Texas before it became a republic. It’s best recognised for favourites such as burritos and enchiladas heavily laden with yellow cheese and sour cream. South-of -the-border Mexican is light and healthy with a complexity of flavour, a product of its generous use of fresh vegetables, citrus and herbs. Its unique taste is the result of singular local ingredients such as the achiote seed, dried beans, an amazing selection of fresh, pickled, smoked and dried chillies, chocolate (not sweetened) , coriander, the fungus huitlachoche and limes. And, of course, corn. As Diego Rivera noted: “If Mexicans don’t have corn, they don’t have anything”. 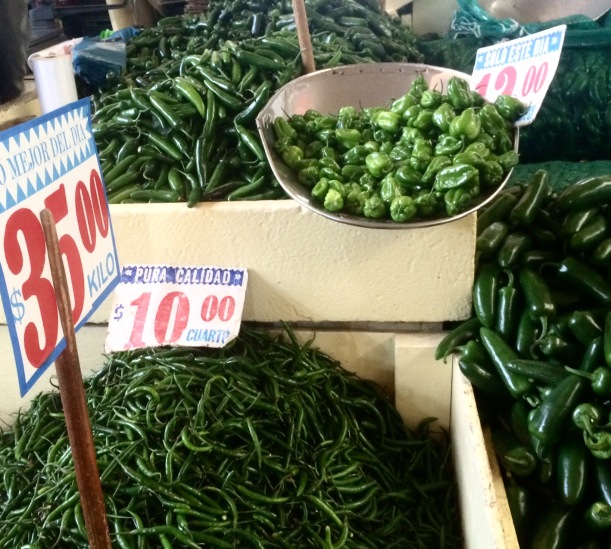 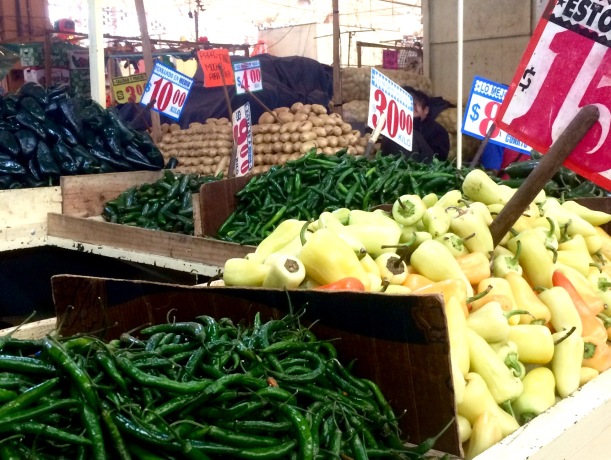 At the heart of Mexican cuisine are mole sauces, of which guacamole is one (except in Western cuisine it’s more of a dip). Moles are a fusion food, a mix of indigenous and Spanish cooking styles. The various sauces are made from a surprising list of ingredients including chillies, nuts, chocolate, beans, seeds, plantain bananas and other fruits. Moles accompany a variety of meat, fish and vegetable dishes, the most famous being poblano which originated in Puebla and is teamed with meat dishes. Oaxaca is another renowned mole centre. 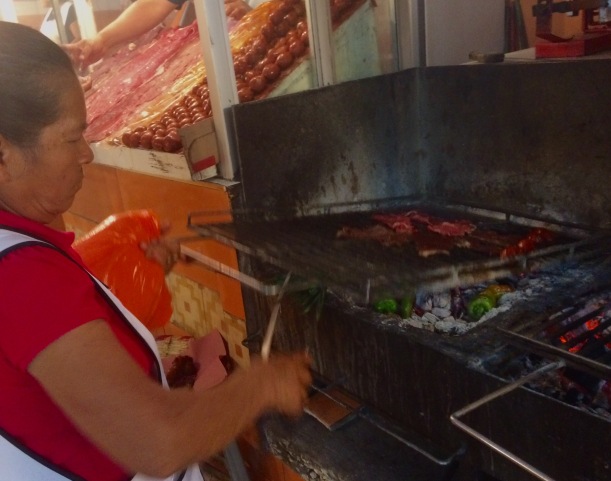 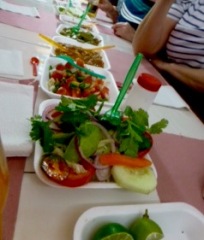 We experienced the originality of the Mexican culinary experience at a barbecue-with-a difference at the Oaxaca Market. Customers select their meats and sausages from the market stalls for cooking on large hot-coal barbecues. Meanwhile, as the meat cooks, guests take their seat at long tables to be served with an array of corn wraps, salads, salsas, chillies (beware certain varieties!) and other accompaniments. All the while strolling Mariachi musicians provide entertainment, a fitting serenade for my birthday which happened to coincide with our visit. 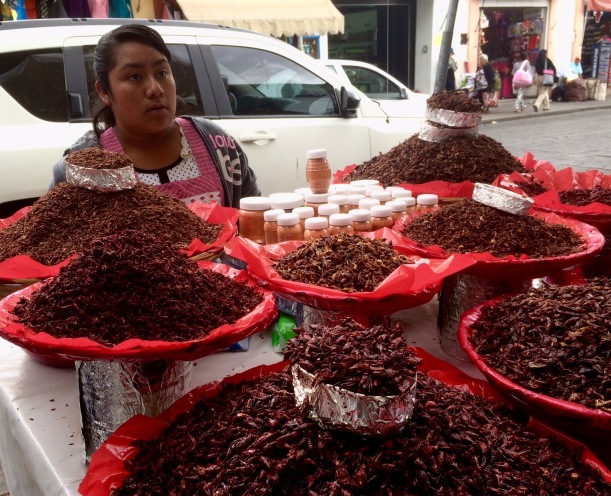 Not on the BBQ menu – dried grasshoppers marinated in chilli and lime juice.