Wandering around the market area of Mexico City we were fascinated by numerous shop windows displaying doe-eyed dolls elaborately dressed in various costumes, many identified as the different saints. We were similarly mystified to see adults walking around the city and lovingly carrying these beautifully attired “babies” as if they were flesh and blood, and proud to be photographed with their bundle. In the market there were stalls laden with garments especially for these dolls.

A little research revealed the dolls were Ninos Dios a custom linked to Candelaria – or Candlemas – which our visit coincided with. Family households, or those who still follow this tradition in the increasingly secular society, own a Ninos Dios, or Child God venerating the Baby Jesus, a tradition imported by the Spanish but subsequently incorporating indigenous beliefs creating a uniquely Mexican custom. Not only are the Ninos Dios dressed as various saints, but local costumes get a look-in too. The custom decrees a new outfit each year, hence the well-stocked market stalls.

For those who’ve forgotten their Sunday School lessons Candlemas commemorates the presentation of the Baby Jesus at the temple. It takes place on 2 February, the 40th day of the Christmas-Epiphany period. On Candelaria Mexicans attend mass, taking their Ninos for blessing, later returning it to its safe-keeping place until the following year. Mass is followed by a feast breakfast with special corn-based steamed tamales stuffed with traditional fillings.  Our diligent tour guide organised for our hotel to serve the feast which included an interesting non-sweet hot chocolate drink. The original hot chocolate?

In Australia the cactus plant is much maligned, its prickly spikes the scourge of graziers. Vast tracks of outback land have been overrun since its introduction in the 19th century as a natural agricultural fence material and to kick start a cochineal industry. As any trip into the bush will tell you the cactus took to Australia like those other imports the rabbit and the cane toad. In contrast, in Mexico, the cactus in its hundreds of varieties is a hero. In fact listening to a list of its uses gives the impression that the cactus was central to the rise of Mesoamerican culture. 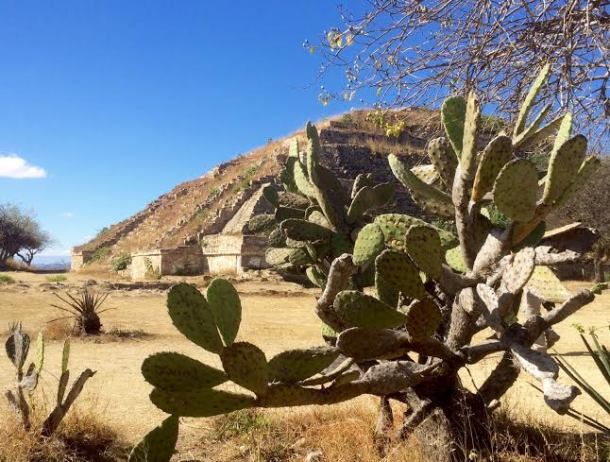 Apart from contributing a central symbol to the Mexican flag, the aforementioned agricultural fence, for which a column-like variety was used, and the cochineal extracted from the parasitic bug, the cactus’ uses were varied.  It was a valued food source – try Googling salad and salsa recipes – and a central ingredient in building materials, glue, to strengthening mortar, stiffening cloth and very handy as firewood. It has a long list of medicinal uses: to heal wounds, cure abscesses, strengthen the lungs, purge intestinal parasites, increase maternal milk production, treat urinary problems and to improve cardiovascular and bowel health. Cactus needles were ideal for acupuncture.  Our visit to the dyeing and weaving studio highlighted the uses of cactus in that process, including using cactus ash in the mixing of dyes and cochineal colouring. 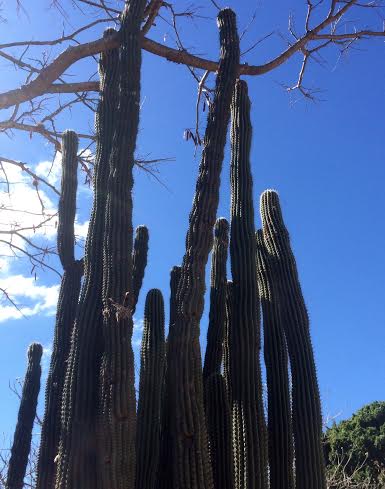 Edible cactus being deprickled in the Mexico City market.

The cactus also made a significant contribution to Mesoamerican ceremonial life, with many varieties having hallucinogenic qualities which were a central part of rituals and a source of revelation for their shamans.  No doubt a contributor also to Mexican penchant for chaotic colour combinations. We were told that a number of 60s and 70s rock musicians, including Jim Morrison, Santana, and Pink Floyd, visited a revered female shaman ahead of composing memorable hits such as Riders on the Storm, Black Magic Woman and Dark Side of the Moon. And the peyote cactus is the source of the very popular local drink mescal, and mescalin, which has become one of the stock drugs fueling the current lethal drug cartel wars in Mexico.

Last but not least the argave cactus variety is the ingredient for tequila, the basic ingredient of one of Mexico’s best loved contributions to the world, the Margarita.  If only our early settlers had made that connection maybe it would beaten the beer to being our favourite tipple.

Getting a lean on…the old Guadeloupe Basilica split in two.

There’s an irony in the subject of Mexico City’s water supply. Consider: the city was constructed directly over the old Aztec City of Tenochtitlan which was built in the middle of a lake and known as the Venice of the New World. It was famous for its rich and highly productive floating gardens. Come the Conquistadors and the lake was drained, the lacustrine wonderland destroyed. Water was then pumped from underground aquifers. 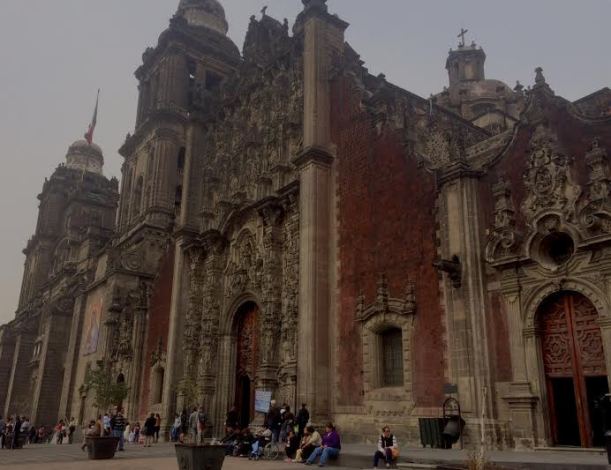 Listing a little, the Metropolitan Cathedral of the Assumption.

Fast forward a few centuries and Mexico City has become one of the thirstiest cities in the world, its 21 million residents guzzling their way through  hundreds of billions of litres a year, 70 percent sourced from the subterranean sources.  But the water is not being replaced at the same rate as it is being extracted leaving the city with a significant subsidence problem, dropping a reported 9 m in the past 60 or so years.  Historic buildings in the city centre, such as the huge, more than 500-year-old, Metropolitan Cathedral of the Assumption, are listing and others, including the old Guadeloupe Basilica, have actually split apart. Standing inside the monumental building is an unsettling feeling, the floor beneath on a distinct incline. 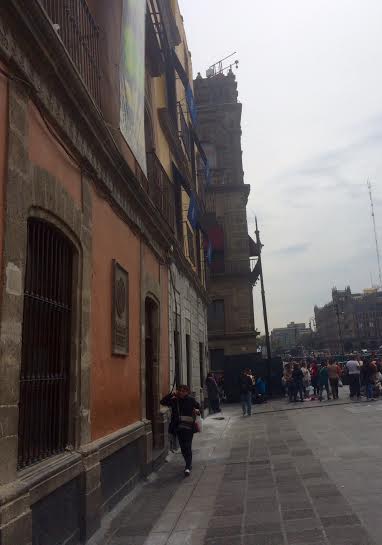 Mexico City’s location in a volcanic zone and on an earthquake fault line does not help, especially by damaging the  aging pipelines. Water is now being pumped from disputed sources over 100 km away, angering the indigenous land owners who complain that their resources are being depleted while they are denied reliable supplies.  And local households and businesses  must contend with erratic services and soaring prices . Of course, there are those who profit greatly from the premium placed on supply. Water trucks, bottled water manufactures, bottled water deliveries and public pay flush toilets, or banos, are some of the businesses which cater to fill the demand.   During our week-long stay we experienced a 24-hour loss of supply resulting in a water truck replenishing our hotel in the middle of the night. Apparently water outages are commonplace, as are sewerage problems. Maybe time to consult Tlaloc, the Aztec god of water, rain and lightning on how to how to return to the good old days?

Pay as you go WCs. 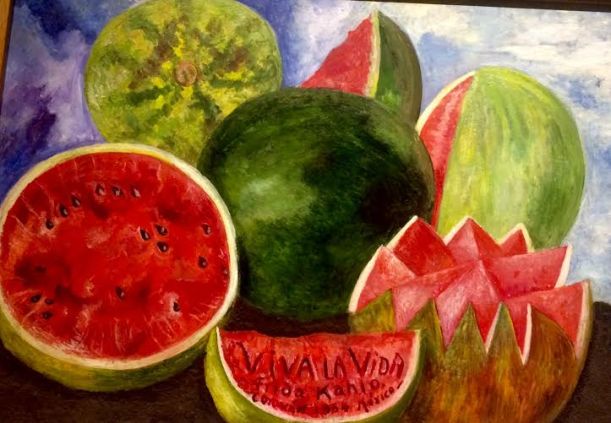 Mexico’s Queen of Colour, the famously mono-browed Frida Kahlo, entered my world years ago when we acquired a coffee table book about her long-time relationship with the camera. Frida was the daughter of a German-born photographer, and Mexican mother, and well accustomed to both sides of the lens. But she was best known for her sumptuously polychromatic paintings. So when I visited San Francisco’s wonderful Museum of Modern Art which boasted a number of Frida originals – and some of her husband, equally famous artist Diego Rivera – I was able to experience first-hand her fearless affiliation with the palette. Travelling on to New York I was just as excited by that MOMA’s Kahlo and Rivera pieces. Mexico City was immediately added to the “must-visit” list. 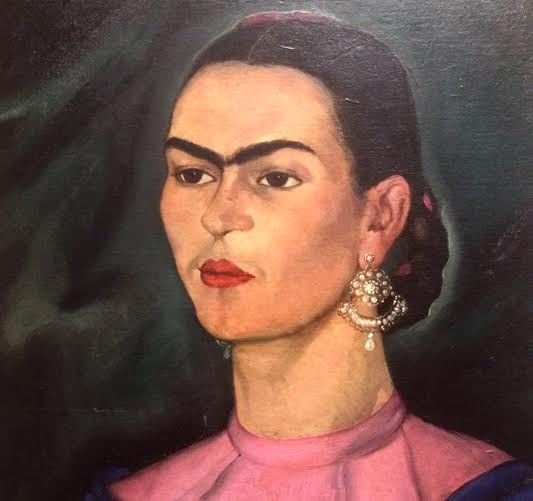 Self-portraits and a photographic portrait.

Frida’s Portrait of a Girl. 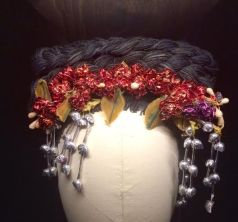 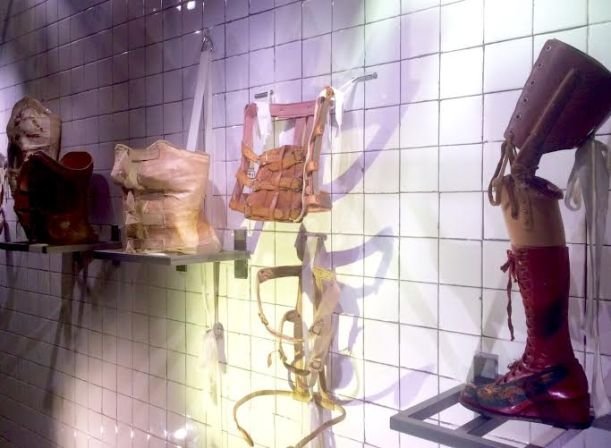 Frida suffered a lifetime of pain.

Frida Kahlo’s art reflects her life and her emotional response to the hardships she faced: a lifetime of health problems after contracting polio at six and being seriously injured in a bus accident at 18; a volatile relationship with Rivera which included a divorce and remarriage; and an incapacity to have children. The suffering is reflected in her numerous uncompromising and confronting autobiographical paintings, and her many self-portraits embracing her striking mono-brow and dark-haired upper lip. Frida and Diego were both heavily involved in the politics of their time which coincided with the Mexican Revolution and the era of Marxism. They belonged to the Communist Party and had famous Communist friends, including Trotsky who lived in Mexico City until his assassination on the orders of Stalin. 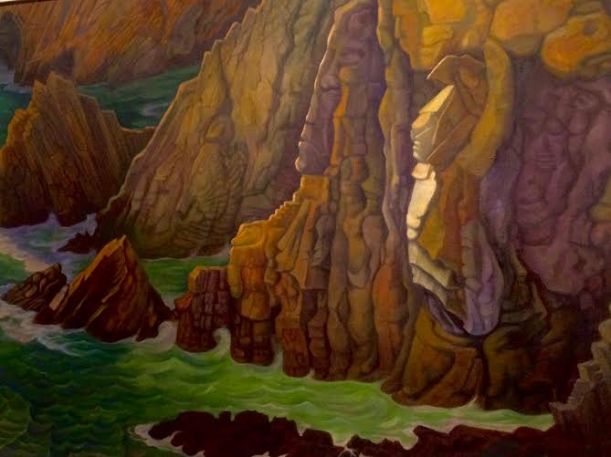 A Rivera Cubism piece at the museum.

Rivera was best known for his huge educative murals, this at the Palacio de Bellas Artes.

The best place to experience this dynamic Mexican artist’s work is at the Frida Kahlo Museum the Blue House, or La Casa Azul, named for its stunning cobalt blue hue, and located in Coyoacan borough. It was her family home from birth to death, and also where she lived for a number of years with Diego Rivera. The museum’s two floors contain various bedrooms, an expansive kitchen, a dining room and studio space. Natural stone mosaics inspired by the murals of their friend, the Irish-Mexican architect Juan O’Gorman, decorate the entrance hall. The museum houses many of Frida and Rivera’s works, as well as folk art, and many personal items and memorabilia. Rivera was a leading art teacher and muralist with many expansive on view across the country, especially in Mexico City.

A section of the museum features stunning pieces from Frida’s eclectic and flamboyant wardrobe and also a display of her prostheses and medical aids. Her distinctive clothing style is an amalgam of the colourful folk costumes of her mother’s Oaxacan heritage, and the European folk style reflecting her Grman heritage, combined with long skirts to cover the legs damaged by polio and the accident.  Outside, the courtyard garden is a rainbow of cobalt, ochre, yellow and green, perfectly exemplifying Kahlo’s and Mexico’s communication with matters chromatic. 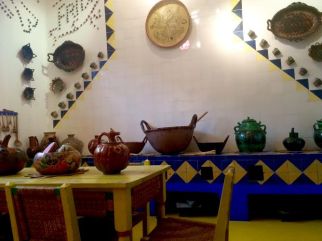 Photograph of Trotsky, Frida and others. 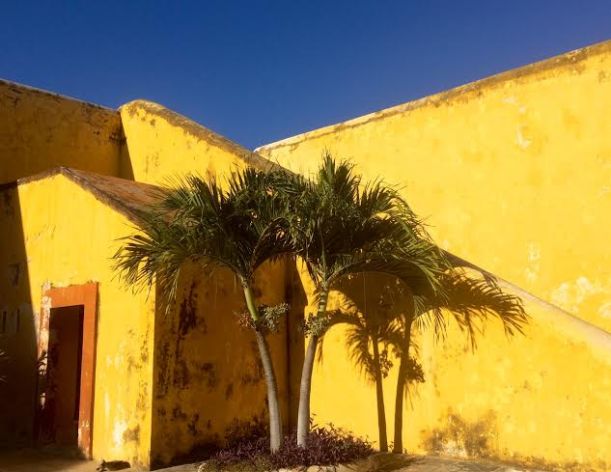 If I was asked to sum up Mexico in one word I’d say – colourful! It’s not just the absolute opulence of colour in the built environment, crafts, fabrics and food. The people themselves exude warmth and colour. The 50-km drive to the pyramids at Teotihuacan offers proof, if any is needed, of the Mexicans’ love for colour. Tumbling down every slope along the valley sides is a kaleidoscopic avalanche of dwellings: apple greens, hot pinks, purples, aquas, yellows the rich pallet defying the poverty of the actual structures, a coat-of-many-colours richness that would delight Dolly Parton.

A love of colour is another of the gifts bequeathed to modern-day Mexicans by their Mesoamerican forebears. Recent archaeological work is uncovering this poly-chromatic patrimony and its significance. Religion and ceremony were central and rituals including  a shamanistic penchant for hallucinogens added a psychedelic dimension. In another happy coincidence natural sources offered rich opportunities for a heroic attitude to body art, architectural decoration, ceramics and arts and crafts.  Colour was extracted from minerals including clay,  a variety of plants and insects such as the cochineal bug. 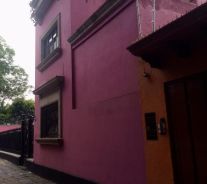 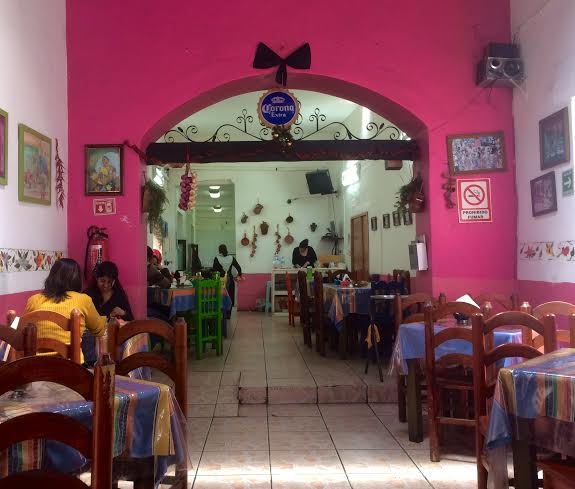 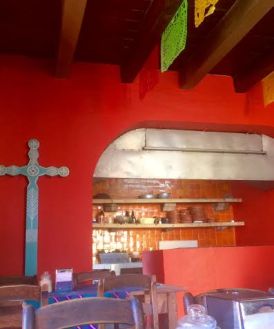 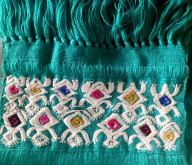 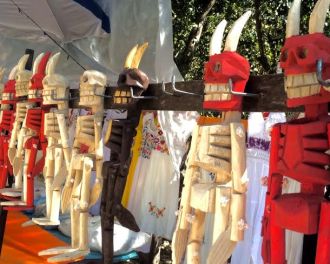 Renowned Mexican weaver Bulmaro Perez Mendoza let us in to some of his colour secrets when we visited his Teotitlan studio, near Oaxaca.  All his dyeing is done with natural substances, from the washing of wool in nearby streams, to sealing the colours with lemon juice. The sources of colours includes, of course, the cochineal bug whose qualities everyone knows of from childhood cake icing days, and plants such as indigo, huisache daisies for black alfalfa for green, nutshells for brown, marigolds for orange, and pomegranate shell for gold. Variations in colours are achieved through some unusual mixtures including the ash of burnt cactus. No wonder Senor Mendoza is known as the “Picasso of Carpets”.

The wonderful cochineal bug and its many colours.