When I retired a few years ago I was regularly quizzed on how I would spend my oodles of new-found leisure.  “Read more books” was my repeated response. Of course, I haven’t read nearly as many as I planned – there’s always so much to do when you’re retired! 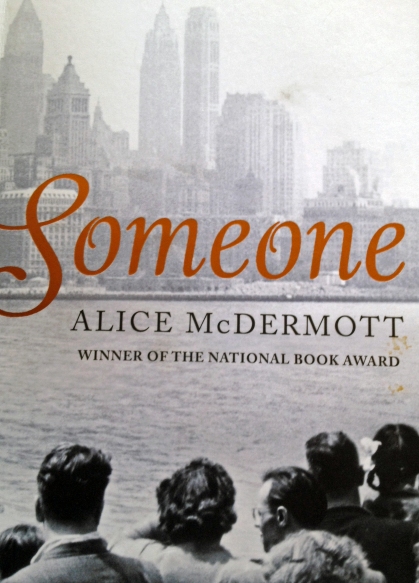 Many friends have resolved the ambition to “read more books” by joining a book club.  Most speak glowingly of the enjoyment derived from getting together with others to discuss and analyse a shared book, often over a glass of wine and a meal. There’s companionship and the exchange of opinions and the discipline imposed which gets the books read. But despite those reassurances joining a book club wasn’t my thing.

Until recently! A friend, a seasoned book clubber, said a spot had become available in her circle and would I like to join? Curbing my instinct to graciously decline I chose to do a trusty old SWAT analysis on the proposition. My reluctance hinged mostly on the disciplines involved: to read a book I may not like; to have to read according to a set timetable; the tricky dynamics of groups, especially when you don’t know the other members well; the risk of the group being too much “club” and not enough “book”; my responsibilities to the group dynamic.

On the potential plus side? The discipline would ensure I completed at least one book a month – what better way to “read more books”? I would pay more attention to the writing so I could substantiate views on the read – it’s easier to say you’re enjoying a book than to explain why. I would be introduced to tomes I might not otherwise have considered. And then there’s always the enticing meal and glass of wine to enjoy with refreshing company.

My SWAT research turned up useful musings on the very subject which have, serendipitously, given me a couple of other potentially interesting blogs to follow. Not surprisingly both aired similar reservations to mine when mulling to-join-or-not-to-join decisions.

Since becoming a book clubber we’ve read and discussed three novels: The Miniaturist by British writer Jessie Burton; Someone, by American Alice McDermott; and the current selection, Australian and Booker Prize winner Thomas Keneally’s Daughters of Mars. I was engaged by Someone, the story of an ordinary life in the Irish American Brooklyn community told in modest style, the characters so finely drawn. Jessie Burton’s debut novel took my fancy less, building unrealised intrigue. But as a window into the life of the well-to-do merchant class in 17th century Holland it held the attention. Thomas Keneally’s account of the lives of Australian nurses in the First World War, drawn from the journals of actual participants, falls into the category of “epic”, and is a timely read given the recent ANZAC centenary. I’m pleased we have six weeks between meetings this time to do justice to the almost-600 pages which foster profound feelings of admiration for the courage, skill and spirit of these Australian women of a century ago. We can be truly proud of them.

Back when you could visit Syria, Palmyra was a much-anticipated highlight. World Heritage listed by UNESCO for pristine ruins recalling its history as an ancient Silk Road hub, and as a key outpost of the Seleucid and Roman Empires, Palmyra was not just one of Syria’s treasures, but the world’s. So the news of the past few days of its fate as the latest victim of the Daesh (ISIS) onslaught has prompted dismal recollections of my 2010 visit.

The incomparable Temple of Bel and environs. 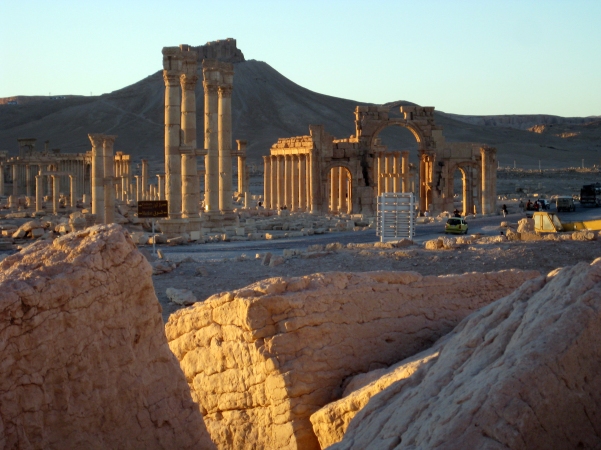 We arrived in the green oasis, the dusty palms of which give Palmyra its name, with the rosy glow of the sinking sun bathing the incomparable Temple of Bel.  Famous Queen Zenobia, who expanded the Palmyrene Empire as far as Egypt in the third century AD, expelling a Roman prefect in the process, rode these same streets; as far back as the second millennium BC those traversing the Syrian desert would welcome the sight of Palmyra’s palms as their caravans took a well-earned break. Exotic fare traded from far-flung corners passed through. Reliefs carved into the Temple of Bel depict foods rare in desert climes such as fish and pineapples. The Valley of Tombs necropolis reminds visitors of the Seleucids’ reign while the remnants of a military complex which fortified the Roman Emperor Diocletian during his tenure still stand watch over the valley.

What fate for the quaint Temple of Ba’alshamin celebrating the God of heavens, storms and rain?

With the Daesh‘s interpretation of idolatry, or any monument lauding other cultures and religions, what hope for these priceless antiquities which give so much pleasure and inspiration? Already there are reports of executions of local people. And what of those Palmyrese that made our desert visit so colourful and memorable? The motor-cycle riding, budding Bedu entrepreneurs who herded us into manageable buying groups to offload their wares of camel bone jewellery, textiles and scarves; or the Bedouin entertainers who delighted us with evening music and dancing and banquets of goat, rice, lentils and salads in carpeted tents? Are they among the victims? Are the coloured floodlights still shining on Palmyra’s Roman colonnades? Or, like so many of the region’s lives and treasures, have the lights been snuffed out? 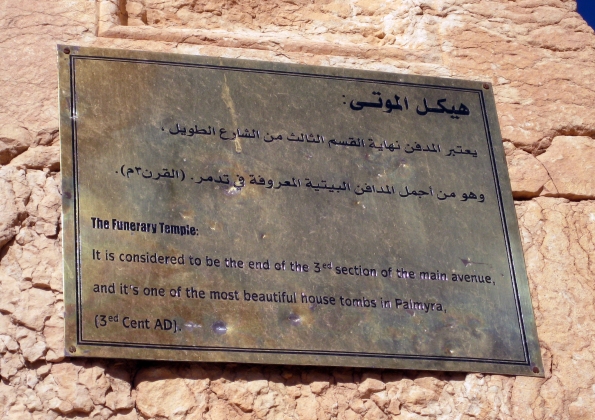 The Valley of Tombs would face an uncertain future. 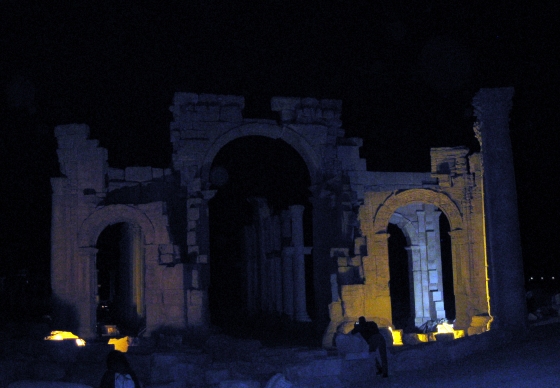 Are the lights still shining on Palmyra’s Roman colonnades?