In a country so blessed with tourism jewels – including real gems – it’s hard to pick the one for the crown. But if pressed I would nominate Inle Lake as a real sparkler, although one in danger of being loved to death despite its status as a wildlife conservancy area.

Nestled in the hills of Shan state, this 116sq km body of water – Myanmar’s second largest freshwater lake – is best described as a Burmese Venice, a true floating city. Life is lived IN the lake – homes, “roads”, hotels, gardens, shops, businesses all perch above the water. The lake itself is a super highway criss-crossed from dawn to dusk with longboats propelled by powerful outboards carrying all daily necessities and tradable goods. Longboats are moored outside houses just like cars. Even a trip to the corner store or post office means hopping aboard.

The Inle Palace Resort where guests can drift off the sleep to the sound of lapping water. 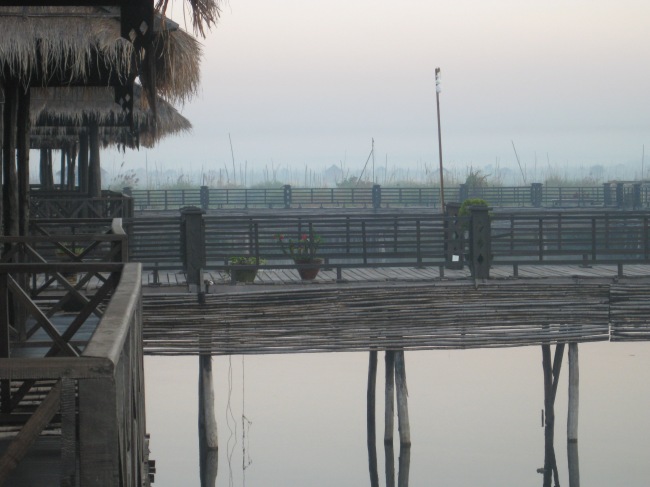 A misty and smoky morning looking across Inle Lake.

A longboat loaded with bags of rice off to market.

Another load of tourist head down the main “street”.

The lake is an abundant source of food: a species of carp is a local staple and vegetables, particularly tomatoes, grow in clever floating gardens made from grasses dredged from the lake bottom and anchored by bamboo poles. The original hydroponic gardens? The diligent fishermen propel their craft with a unique leg-rowing technique and entrap their prey in cone-shaped bamboo devices – a popular tourist publication image. Small craft industries abound including silk making from lotus roots, cheroot manufacture, gold and silver-smithing and tool making. 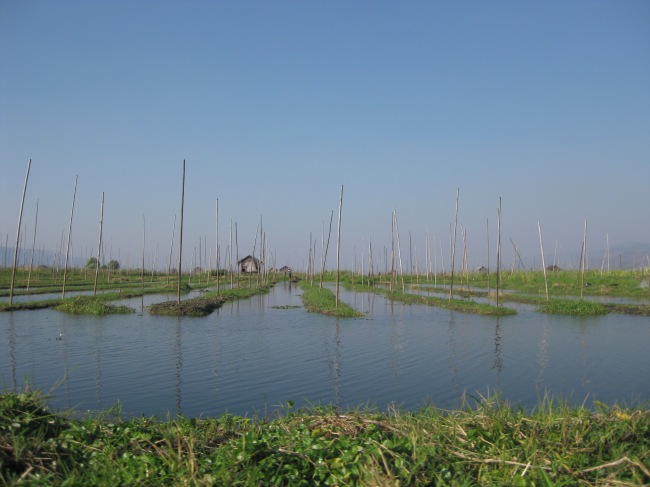 All this activity, and the tens of thousands of tourists it attracts, is stressing the fragile ecosystem. Longboat noise and diesel fumes are disturbing the peace and polluting the air; sewerage and other waste from hotels and villages are affecting water quality; logging and agricultural practices are creating a build-up of silt and nutrients. Sounds a bit like what’s happening to the Great Barrier Reef.

The road to Mandalay carries the heavy weight of romantic expectation but in reality you wouldn’t want to travel too far on it. So it’s serendipitous that Mandalay sits on the mighty Irrawaddy – or Ayeyarwady – River, a waterway which is so much more than just a fast-moving body of water. Daily, the Irrawaddy is jam-packed with an array of vessels carrying just about anything you’d find heading down a super highway in a bus, car or semi-trailer. Livestock, timber, machinery, workers, tourists – there are boats to transport them all.

We pass the important religious and monastic Sagaing division which boasts 600 nunneries and monasteries and 6000 monks and nuns.

Like other great Southeast Asian rivers such as the Mekong, the Irrawaddy is truly a lifeblood channel. Apart from a transport route, albeit dependant on fluctuating water levels, the river is a source of fish, provides water for drinking and bathing while the banks and sandbanks transform to lush garden beds for a multiplicity of crops after yearly monsoon floods. It’s also a great spot to pan for alluvial gold. 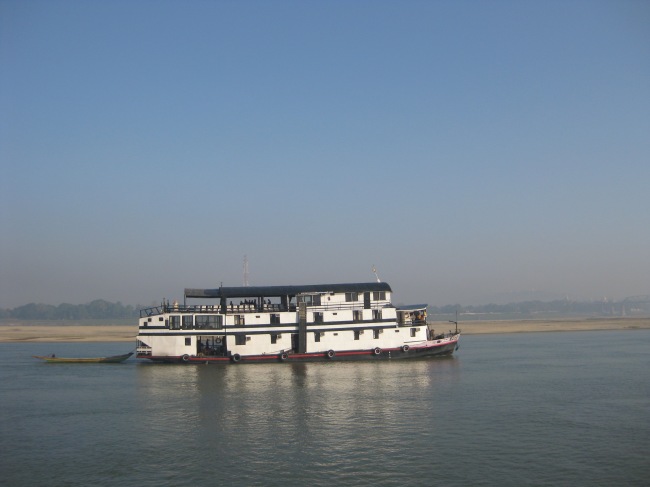 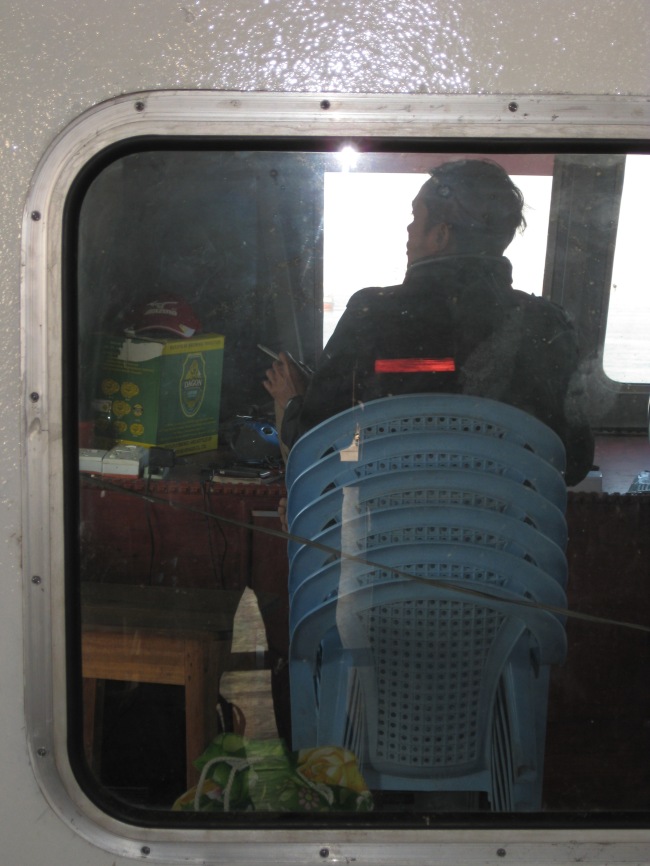 So what better way to get from Mandalay to the archaeological wonder of Bagan than by a leisurely day on the river in a passenger ferry watching the daily life of Burma pass by? Setting out from Mandalay harbour in the early-morning mist – and the ever-present smoke from unregulated incineration – we selected our armchairs on the deck and settled back to enjoy the 10-hour cruise. Much more romantic than yet another air flight!

Traveling companions settle back and enjoy a leisurely day on the river. 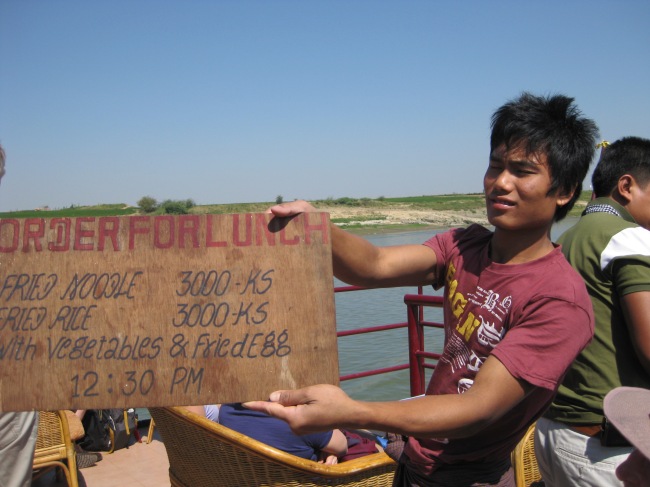 One of first things you notice in Myanmar – after all the gold – is the women’s faces. Yes, they’re beautiful, but also covered in a creamy, pancake-like paste. The unique maquillage is an emollient called thanaka, an all-in-one sun block, make-up, skin conditioner and acne cure. 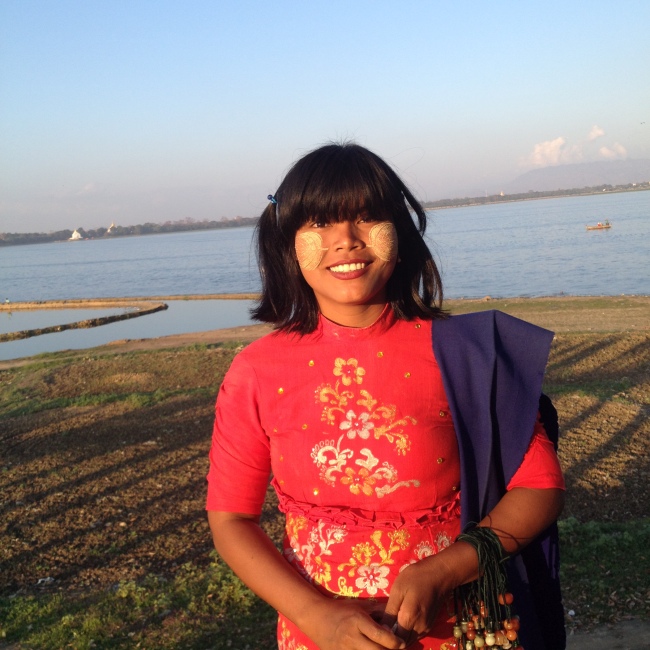 …and the more mature.

Thanaka is made from the murea exotica tree of central Myanmar which, we were told, is a local sandalwood. Thanaka has been the beauty secret of Burmese women’s since the earliest times because of its capacity to cools skins, tighten pores and control oiliness. According to an old Asian proverb Burmese women have the most beautiful skin in the world, no doubt because of this magic salve. Mothers also use it to protect tender children’s skins.

..and for tender young skins too.

One of thanaka’s most valued properties is as a protection against Burma’s harsh tropical sun for the many who work outdoors for long periods, especially in rural areas. It’s not uncommon to see women working on road gangs and in rice paddies so the cosmetic assistance of this peculiarly Burmese sun block would be greatly appreciated.

Time to get out the thanaka.

Thanaka is not just for casual slathering. It offers artistic opportunities for the adventurous with many women – especially the young – etching intricate designs into the cosmetic covering, not unlike the creamy artistry achieved by some our more talented baristas.

Another reason for us Western women to envy our Burmese sisters’ cosmetic secret is that it’s organic. No nasty chemicals or preservatives.

If only I had known about thanaka when I was a sun-loving, oily-skinned, pimply teenager!

The streets of Myanmar may not be paved with gold, but their shrines and temples are another matter altogether. It’s hard to imagine a more encrusted realm. No wonder it’s called the golden land.

Applying gold leaf to objects of religious significance is a common and ancient ritual in Myanmar because gilding a Buddha image or stupa bestows great credit on the gilder. Not surprisingly, creating gold leaf is a significant cottage industry and dates back to the time of the early monarchs. Mandalay is the heart of the industry.

The Golden Rock – Kyaiktiyo – attracts its fare share of gold leaf as one of the Myanmar’s most revered Buddhist sites. It’s said that the rock is held in place by a strand of the Buddha’s hair. 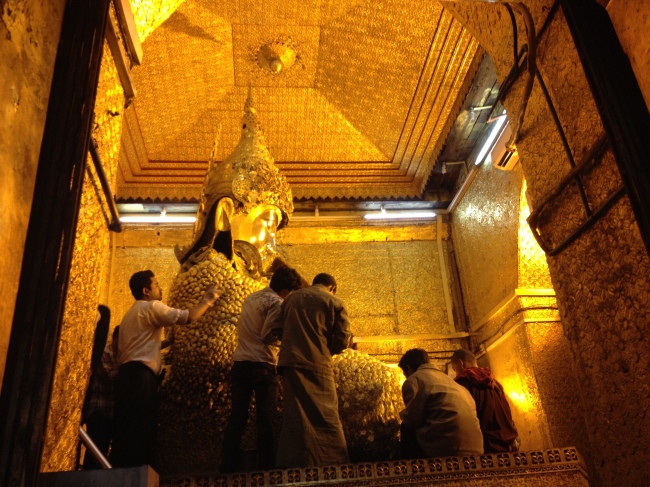 The Buddha image at the Mahamuni Pagoda near Mandalay – a major pilgrimage site – is absolutely bulbous with accumulated gold leaf diligently applied by male worshipers. Female worshipers must stay behind a designated point.

Making gold leaf is a painstakingly process. A team of (very fit) young men repeatedly and rhythmically pound wafers of gold trapped between sheets of parchment with wooden mallets, a process that takes many hours. At a given call the pounders change the rhythm, perhaps to break the monotony of the task. The heat generated by the relentless striking steadily thins the wafers. Luckily gold is highly malleable.

What a way to keep fit!

Once this exacting procedure has rendered the gold foil to its desired thickness – or thinness – the sheets are transferred for cutting and sorting and packaging by a team of women. The typical gold-leaf square measures just 0.000127cm, said to be thinner than ink on the printed page.

Gold leaf not only adorns temples and shrines. It adds lustre to already exquisite laquerware – boxes, trays, bracelets and numerous other items – especially to shiny black pieces. It’s also used for traditional medicines and in make-up to add sparkle to the a woman’s skin. A golden glow indeed! 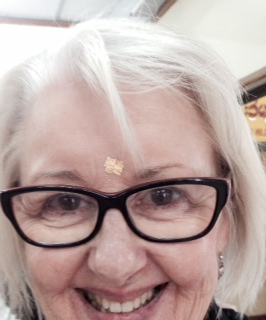